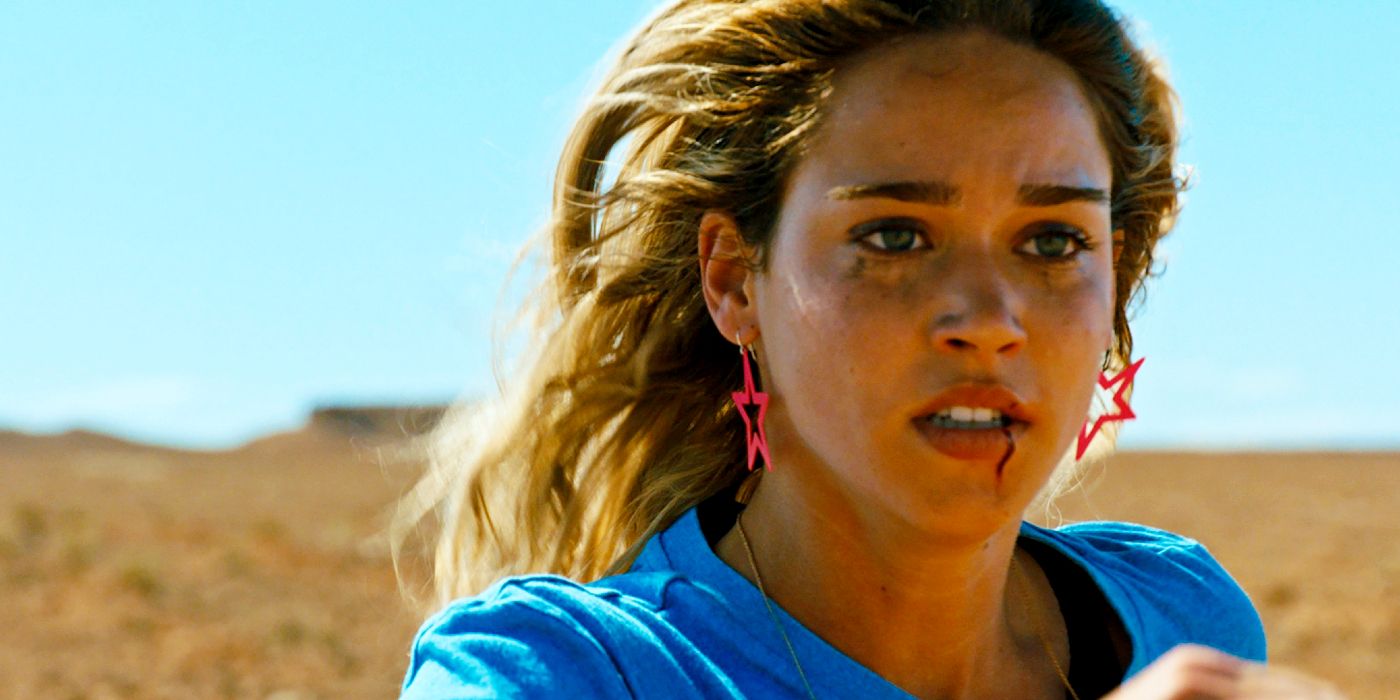 Released in 2017, Fargeat’s wild film flips the rape/revenge horror narrative on its head, offering itself up as a refreshing and stylistic addition to the genre’s roster. Fargeat’s heroine is put through hell, but Jen’s suffering only strengthens her will to survive, shocking the men who foolishly underestimate her. Through explosive moments that solidify Revenge as one of the gorier modern horror movies, it can make even the hardiest of genre fans squirm in their seat.

While an evening of partying gets the group off to a promising start, the following morning brings a violent end to the pleasantries. While Richard is out on an errand Jen is raped by Stan and, while Dimitri witnesses the attack, he chooses to drown out Jen’s screams with the television and go for a swim, un-phased and apathetic. Upon his return, a seemingly sympathetic Richard offers Jen money and a job in Canada in exchange for her silence. Jen threatens to call his wife, Richard strikes her, then chases her into the desert. When Jen reaches the edge of a cliff, the three men catch up to her and Richard agrees to call her a helicopter before shoving her off the cliff. Impaled by a shrub branch, Jen survives the fall and manages to turn the tables on her assailants, hunting them down one by one. 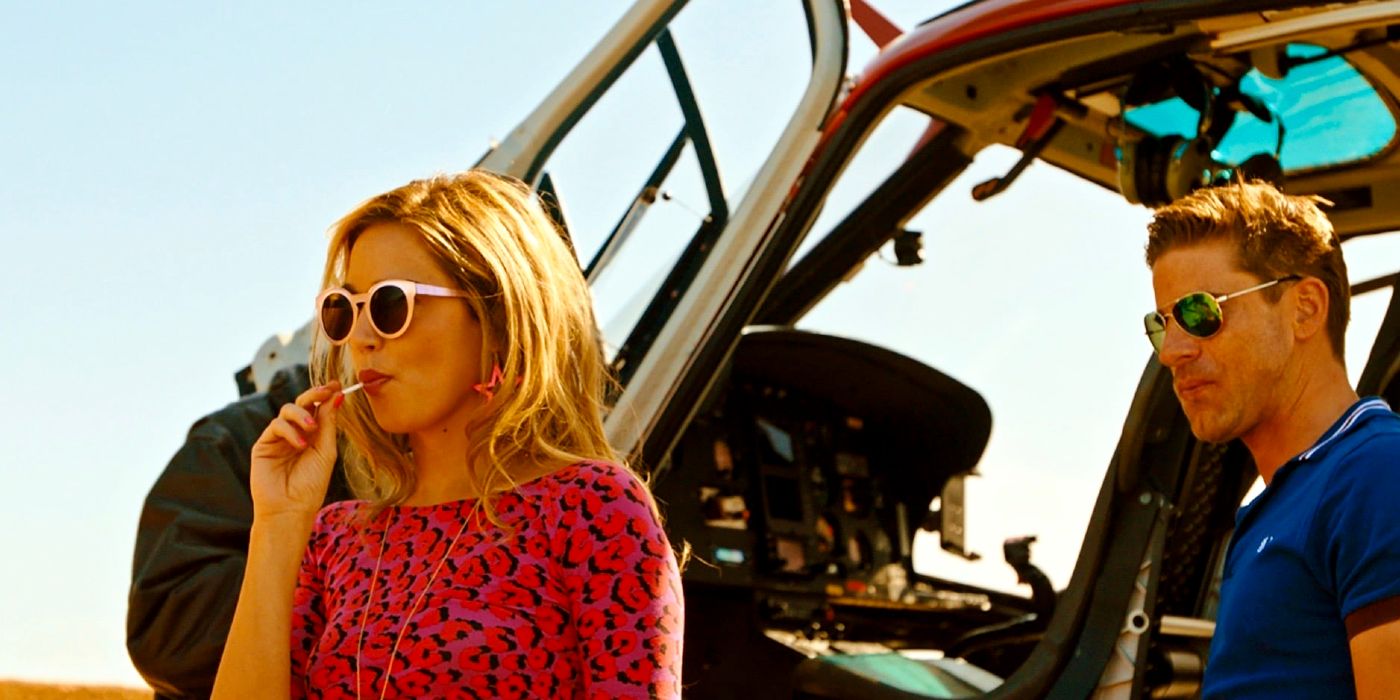 After being pushed off the cliff, Jen wakes up with a branch through her stomach and noticing her lighter nearby, manages to burn through the shrub and escape, the branch is still lodged in her abdomen. The men see that Jen’s body has vanished and they set out to finish the job but Jen manages to kill Dimitri before finding shelter in a nearby cave. Numbing herself with a dose of peyote that Richard had earlier asked her to keep safe, Jen removes the branch, cauterizing her wound with metal from a beer can before passing out. After a series of dreams shows an array of possible deaths, Jen wakes up with the beer’s phoenix logo branded on her skin and exits the cave revived and ready to wreak havoc on the surviving men. After killing Stan, Jen stalks Richard back to the house for a blood-soaked stand off.

Revenge forms itself around Jen’s transformation, both mentally and physically. Fargeat’s early portrayals of Jen show the young w0man as an almost satirical bubbly blonde, ready to accommodate her boyfriend and his intruding friends, no matter how uncomfortable they may make her. When Stan throws her initial friendliness back in her face, insisting she owes him something more, Jen shifts, her sweetness dissipates and rage she did not know she possessed surfaces. Her metamorphosis from a soft-spoken mistress to vicious killer is mirrored by the phoenix on her stomach, stressing her ability to survive and regenerate. At first going out of her way to please the men, Jen now approaches their demise with the same commitment. 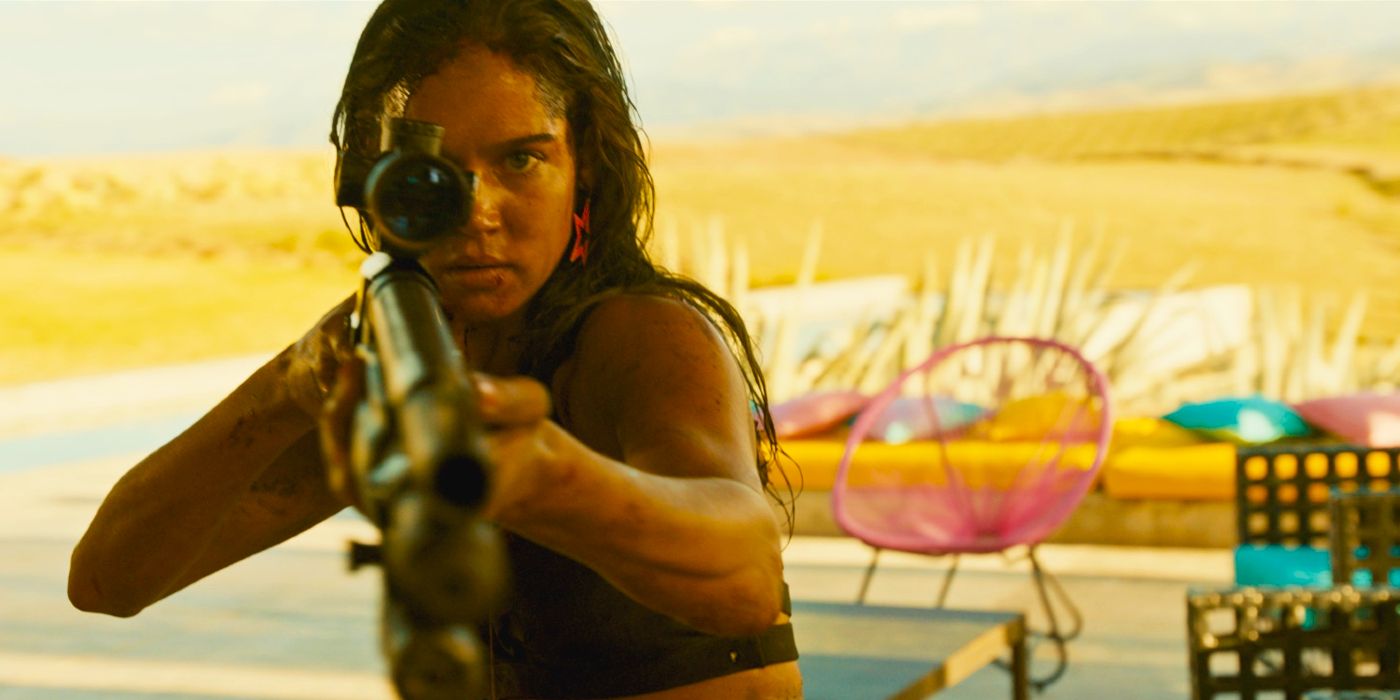 Not yet knowing Jen is at the house, Richard orders the helicopter and gets in the shower. This gives Jen her opportunity to strike; she shoots Richard in the stomach before he manages to flee the room. Quickly arming himself, Richard fights back and a cat-and-mouse chase ensues throughout the maze of a house. Richard catches Jen when she slips in his blood and begins to choke her, complaining about women always putting up a fight. Jen shoves her hand into his gunshot wound causing him to drop her, allowing Jen to re-arm herself and fatally shoot Richard. Caked in blood and desert dirt, Jen walks outside, turning at the sound of an approaching helicopter.

An armed and nearly camouflaged Jen juxtaposes earlier scenes of bright clothing and her admitted desire to be noticed. Trading her lollipop for a shotgun and headphones for binoculars, Jen had adapted to her circumstance and gained the upper hand. Now standing alone in the desert, Jen has come full circle, back on top of the cliffs she was pushed from, ready for whatever the arriving helicopter may bring, be it her escape or more trouble. Her rebirth foreshadowed earlier on by the phoenix branded over her wound, Jen has quiet literally risen from the ashes. 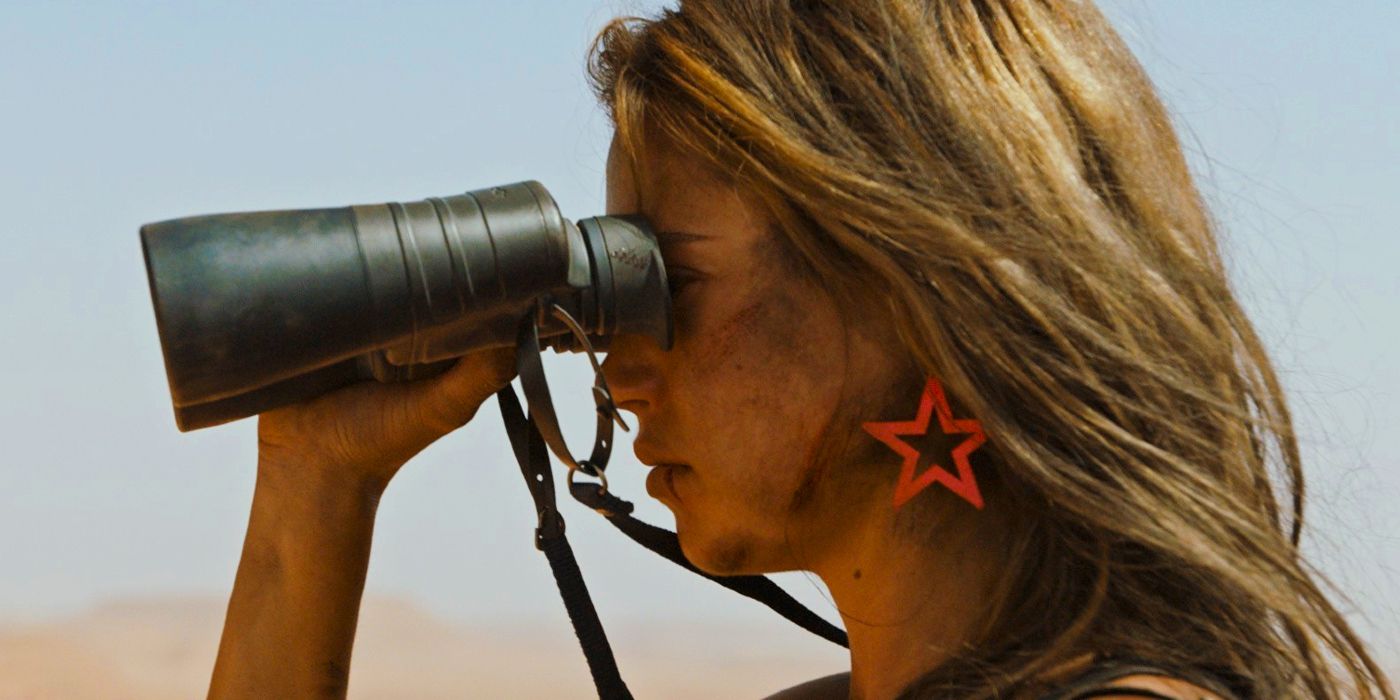 Jen is first seen sitting behind her boyfriend in a helicopter, sucking on a lollipop with a smirk on her face as they approach their isolated getaway. Jen is not portrayed as an innocent character, as many victims in the rape/revenge sub-genre are. Often, their chasteness is boasted in an attempt to worsen their impending sexual assault. Jen is aware of her sexuality, and seems to happily embrace it. While Stan delivers an all too familiar “you were asking for it” speech, Jen is not so easily shamed into silence. Fargeat also refrains from showing Jen naked. Instead, she depicts Richard nude in multiple scenes. During the last scene, Richard is not only nude, but extremely vulnerable; this is a position the horror genre often reserves for women.

Fargeat focuses more on Jen’s survival rather than her assault, giving viewers a refreshing break from agonizing scenes of sexual violence against women, something the rape/revenge sub-genre has been consistently criticized for. Revenge avoids showing female suffering through the male gaze, a theme that has existed too long in the horror genre but is rapidly being broken down by new, inventive narratives.

Scrubs: Zach Braff Expects They’ll Do A Movie One Day

Peter Crouch: Save Our Summer on BBC1 – Guests, format and everything you need to know